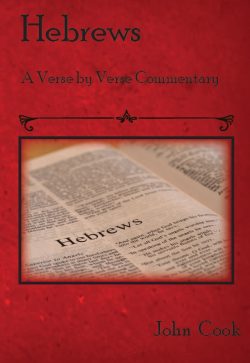 Description
John Cook was a true son of Texas. Born here in 1954, John grew up in a Christian family and was riding bulls in rodeos while still in high school. After graduation, John honorably served in the Army, in both South Korea and Germany. Following his enlistment in the Army, John returned to Texas, got married and moved to Oklahoma to work in the oil fields while raising a family.
John Cook was also a true, born again, child of God. He and his wife Pam raised their children in the church and it was during this period of his life that John started questioning some of the teachings coming from the pulpit in his church.
However, he did not feel qualified to debate these teachings with the pastor. This was when he decided it was time to go to Bible college.
John arrived at Tyndale Theological Seminary and Biblical Institute about six months after I did. As students, sharing many of the same classes, and as members of Seminary Bible Fellowship Church (later renamed Tyndale Bible Church), we quickly became friends. Little did we know that, together, we would pursue bachelors, masters, and doctoral degrees.
Throughout our course of studies, John took particular interest in the biblical languages and Latin. Tyndale has always emphasized the study of the original biblical languages: Hebrew, Aramaic and Greek, but John pursued additional studies past those required by his program, eventually taking, I believe, every language course offered, including those from guest lecturers.
His greatest love was biblical Greek, and during his course of studies, John started working at Tyndale as the school Registrar. After graduation he began teaching Greek and Theology to undergraduate, graduate, and seminary level students.
John rose to become Vice President of Tyndale Theological Seminary and, to help our educational efforts, moved with his wife, Pam, to Louisiana, where he established and oversaw a branch campus of Tyndale for a few years before he retired. He came back to Texas, but our Lord saw fit to take our brother to his heavenly home at the young age of 58.
It was during his years at Tyndale that John wrote this commentary on the book of Hebrews. Even to an excellent Greek exegete like John, the book of Hebrews presents its challenges, not the least of which is deciding on who the author was and to whom it was written: unsaved Jews, saved Jews, or a combination of both.
These were the types of challenges that John liked the most, and in this volume you will find an excellent commentary, worthy of your time, written by my friend and colleague, whom I look forward to seeing again!
Patrick E. Belvill
Hurst, Texas

“Now the God of peace, that brought again from the dead our Lord Jesus, that great shepherd of the sheep, through the blood of the everlasting covenant,
Make you perfect in every good work to do his will, working in you that which is well pleasing in his sight, through Jesus Christ; to whom be glory for ever and ever. Amen.” Heb. 13:20-21
John Cook (1954-2012) was Vice President of Tyndale Theological Seminary and Biblical Institute and a Professor of Greek and Theolo­gy. He received his Bachelors (Dip.Th.S.), from Tyndale Biblical Institute and his Masters (M.T.S.), and Doctor of Theology (Th.D.), degrees from Louisiana Baptist Theological Seminary.

theWord Features: Note: Does not display commentary under Bible text.

Return to “Announcements of new versions and updates”